I Have No Business Coaching Anyone, But Don’t Tell My Toddler’s Soccer Team

I always knew my son would be more athletic than I am. Then again, I set the bar pretty low.

When I was in middle school, my mother forced me to sign up for a season of track and field. I chose it only because the discus and shot put offered some of the only chances to compete on my own rather than as a part of a team — and I didn’t want anyone to be able to blame me for screwing up and losing the game. I knew I was uncoordinated, slow and generally lacking in athletic abilities, but I hoped that I could at least throw something down a field — not far enough to win necessarily, just enough to not be last — so no one would notice my many deficits.

One rainy day, we were warming up for practice inside the junior high by sprinting through the hallways. My running style back then was part blind pensioner frantically fleeing a zombie and part brontosaurus trying to struggle free from a tar pit. It wasn’t pretty. As I rounded a corner, my arms flailing, feet thudding against the carpeting and a pained, yet embarrassed, expression on my face, my coach sarcastically remarked, “Damn, that boy is poetry in motion.”

That wasn’t the encouragement I needed to push me to greater heights of sporting achievement. Nonetheless, my mother insisted I sign up for other teams in high school. There was a disastrous season of basketball – where I had the dubious honor of warming benches across the greater upstate New York region – and a season of soccer, which didn’t go so poorly, though it didn’t ignite any passion for the game.

Though around that time I developed what became a lifelong passion for jogging – I liked sweating and straining away from prying eyes without having to worry about passing a ball or avoiding an oncoming defender – I managed to make it to adulthood without a real appreciation for sports. This indifference was compounded by the fact that I grew up in a household that followed zero teams and watched nary a Super Bowl nor a World Series.

Of course, I ended up marrying a woman who was a serious sports star in her youth, excelling at both soccer and track and field. In fact, some of her impressive running records still grace the walls of the athletic department at her college. She gave me a whole new perspective on the value of sports. By listening to her fond memories of time on the playing field, meeting the people she forged lifelong friendships with through sports and seeing how the cornerstones of athletic excellence – practice, dedication, focus, endurance, teamwork, a healthy sense of competition and a desire to always better yourself — have helped her succeed in many aspects of her life, I began to appreciate what sports have to offer.

So when our son was born, it was never a question in my mind whether he would play sports or not. We signed him up for soccer when he was just 2-years-old, thinking it would be a good fit for him. He’s zippier than the Roadrunner, has good hand-eye coordination and loves playing with groups of children. He didn’t take to soccer right away. For most of the first season, he was pretty blasé about the practices, though he enjoyed any excuse to show off how fast he could run.

After a season, I decided it was important I take a bigger role, so I began jointly coaching his team with a family friend. I can’t say the first season went super smoothly. Having never coached and having no base of knowledge of what goes into a successful practice, I had a hard time engaging the children, keeping them focused and imparting the foundational skills they needed. It was even harder trying to manage the team of 15 3-year-olds and keep an eye on my own son, who was still not entirely sold on the virtues of soccer. But we made it through the season without any injuries and plenty of laughs, so it wasn’t a total failure. I was determined the next season would be better.

Luckily, my brother-in-law is a physical education teacher, coach and all around athletic guy, so I turned to him for advice. He told me to keep the exercises simple and fun, repeat the same elements every week in the same order and break the team down into smaller groups for the various drills, so each child had more opportunities to practice each skill. It made sense, but could we pull it off? 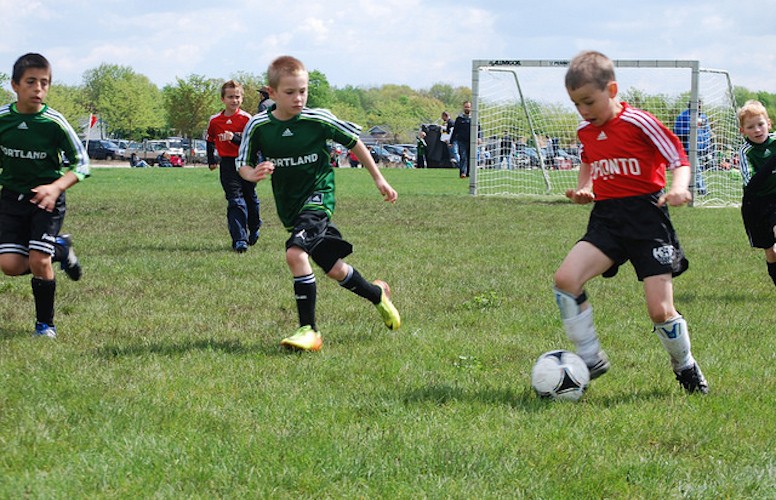 Our first practice was last week. We started out by doing a series of fun warm-ups, like ‘Run in place and make a silly face,’ ‘Touch your toes, touch the sky, jump up high’ and ‘Take big steps down the field stretching out your legs while growling like your favorite dinosaur.’ The little Pelés got into it. You should have heard the T-Rex roars and seen the ridiculous expressions they conjured. From there, we split the team in half to work on dribbling and kicking, occasionally reuniting to do group exercises incorporating those skills.

By the end of practice, my voice was shot, but I was exhilarated. The kids — including my son — were generally engaged, focused and learning. When we brought them together at the end to shout a spirited “Go Red Team!” I felt a bit of the rewarding rush that has drawn people to sports for millennia. In that moment, I knew we had made the right decision to have sports be a part of our son’s life in a way they hadn’t been in mine.

Nevin Martell is a full-time writer, who covers food, travel, parenting and pop culture for many publications, including The Washington Post, Travel + Leisure and Fortune. Find him on Twitter @nevinmartell and at nevinmartell.com.

ADVERTISEMENT
ADVERTISEMENT
More From Play
Play The 33 Best Riddles for Kids That Aren’t Too Confusing
Play 50 Tricky Riddles That Will Keep Even the Smartest Kids Guessing
Play 78 Funny Jokes for Kids (And Adults Who Like Dumb Jokes)
Play The 21 Funniest, Snowiest Winter Jokes for Kids and Chill Adults
Play 87 Coronavirus and Quarantine Jokes to Retrain Your Face to Smile
Play 26 Funny, Clean Jokes for Work That Don’t Cross Any Lines