Dutch artist Florentijn Hofman creates high art for short people. His kid-friendly projects have debuted all over the world and his latest, a playground in Shenzhen, China dubbed the “Kraken,” is worth a second, third, and fourth look — maybe even a bit of climbing as well. The installations, which serves as a reminder that U.S. playgrounds are completely lame, has the wit of a well-placed emoji.

Commissioned by a Chinese real estate company, the Vanke Group, the Kraken is a maze. Beginning at the end of the tentacles, children and adults climb a series of powerful, hand-woven fabric ladders and tunnels inside the Kraken’s head, leading to a giant play area under the octopus’s hat. Hofman collaborated with UAP, an international urban design art team, to find materials strong enough to hold people without losing the woven look.

Hofman previously attained notoriety for floating a wooden hippo down the River Thames. His most famous work, though, is the giant rubber duck, which appeared in waters around the world.

In a sense, Hofman owes a lot to Jeff Koons, who created the balloon dog, and Tom Otterness, who works in bronze to create soft-seeming animals and figures. But his vision is frequently grander and weirder than his influences. He seems to play the role of the giant toddler wandering around the world, leaving toys behind. It’s a unique approach to making cities fun for both children and adults. And it works. 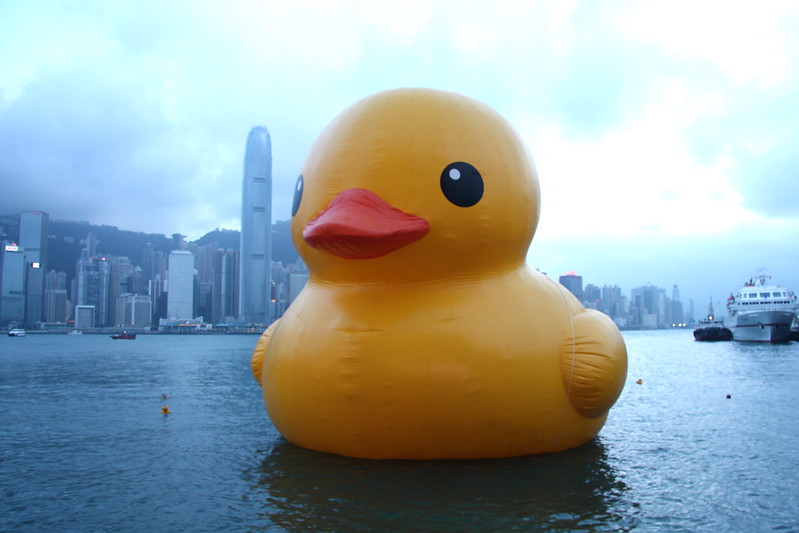 playground
ADVERTISEMENT
ADVERTISEMENT
More From Play
Play The 33 Best Riddles for Kids That Aren’t Too Confusing
Play 50 Tricky Riddles That Will Keep Even the Smartest Kids Guessing
Play 78 Funny Jokes for Kids (And Adults Who Like Dumb Jokes)
Play The 21 Funniest, Snowiest Winter Jokes for Kids and Chill Adults
Play 87 Coronavirus and Quarantine Jokes to Retrain Your Face to Smile
Play 26 Funny, Clean Jokes for Work That Don’t Cross Any Lines