Fun Games to Play With Babies (That They Can Figure Out)

It can be hard to feel like you're playing with a baby during their first year of life, but understanding development can help parents come up with fun baby games.

The best baby games to play are educational but also involve parent-infant bonding. Unfortunately, many of the dreams parents have for playing with a baby go unrealized after the kid is born. Playing with babies, as it turns out, can seem awkward, boring, or completely pointless. Babies can’t throw the old ball around. They lack object permanence and basic motor skills. But that doesn’t mean there’s not plenty of fun to be had in playing with a super young kid. The key is to play to your baby’s strengths, which, let’s face it, aren’t myriad.

“So much of the fun is watching them learn,” says Eileen Kennedy-Moore, family therapist, and author of Growing Friendships: A Kids’ Guide to Making and Keeping Friends. “They’ll be incredibly fascinated by something. And then they’ve mastered it, and they’re over it. You can almost see their brains growing.”

Playing with a parent in infancy is very educational for babies and it goes far beyond any concepts they’re learning. “Playing with each other, being delighted by each other, it’s the crux of one of the great duties as parents: To help teach your child to relate to people,” says Kennedy-Moore. “And playing with parents is a stepping stone to later playing with peers.”

While there are certain developmental milestones that make certain kinds of play more appropriate for different age groups, Kennedy-Moore says it’s important to remember that every child is an individual, so don’t freak out if a kid isn’t there yet by that age. And don’t get too braggy if they’re ahead of schedule.

Keeping an eye on how the infant reacts to any kind of play is important. There’s not a lot of communication coming from the child to the parent at this age, but there are two big signs to look for. If the child gets fussy or starts turning away, they’re likely overwhelmed. Pause and try again later, Kennedy-Moore explains.

Parents shouldn’t disregard the importance of infant play. While an older child won’t consciously remember the playtime that occurs at this age, there are lots of studies that show impacts from interactions at this age. Many of the academic studies focus on the negative, such as the impact of neglect or on the development of phobias. “But that just shows this time matters,” Kennedy-Moore says. “Positive experiences can do nothing but help.”

For parents who are unsure exactly where and how to begin, Kennedy-Moore offers a month-by-month guide to playing with a baby in their first year.

By one month old, babies can start to mimic the faces mom and dad are doing. Nothing too complex. Scrunch noses. Open eyes wide. Laugh lots!

Tie a helium balloon to the infant’s foot and watch as their movements make the balloon dance. “They don’t understand cause and effect yet, so they’ll be amazed. And it’s my all-time favorite thing to watch,” Kennedy-Moore says, and probably one of the best baby games to play.

At this point, the baby is old enough to indulge in both song and finger play. The Itsy Bitsy Spider gives you the opportunity to do both.

By 4 months, babies can mimic some sounds. That means it’s the perfect time to introduce songs where you get to make funny noises. “The Lion Sleeps Tonight” is on point.

Babies can now reach for objects and even start to roll. By placing really cool stuff just out of reach, the baby will reach and wiggle to get them. And mom and dad get to play cheerleader.

“This is fun. So the baby can now track between objects,” Kennedy-Moore says. “So take an object and place it in a hand. Put it forward and let them choose the right hand.”

Kids can now follow along. A game like Peek-a-Boo is great at this age because they’re in on the joke. They’ll cackle along and want you to do it again.

More motor development means giving high fives and reading the signs that a high-five is desired. That equals a rousing game of Patty Cake.

By month 10, kids can now follow two-phase patterns. Teaching some call and response is particularly entertaining for onlookers. “When I say MMM you say Bop. Mmm…”

Kids will now just start to be able to use a spoon on their own. Putting chocolate pudding or another favorite treat that will hold onto the spoon is a great way to help them along.

And when you need a break, or want your baby to explore on his or her own, here are baby toys and games we love, that have developmental value and are safe for babies. 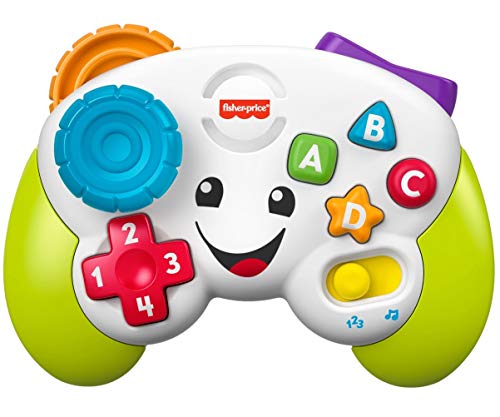 Babies six months and older will love playing with this controller. It has two gaming modes, exposing babies to sounds, and colors.

When babies move the joystick and press the ABCD and number buttons, they’ll hear songs, sounds, and phrases that introduce numbers, shapes, and colors. They begin learning the alphabet (it’s never too early to start) and develop their fine motor skills by pressing and toggling the shapes. 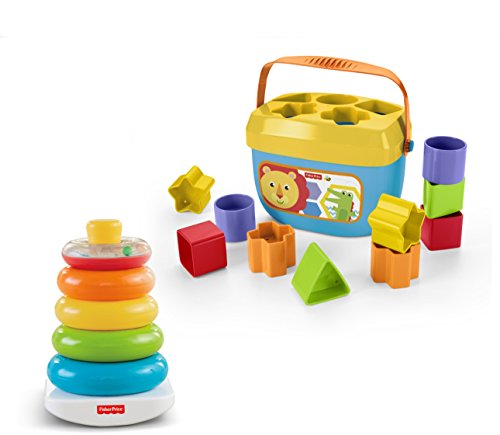 Babies six months and older grab and stack the five colorful rings in this classic ring-stacking toy. And there are also blocks to stack and move around.

Babies sort the shapes into the bucket, and then dump the bucket to see all the colorful blocks come tumbling out. It never gets boring. These games help foster hand-eye coordination and dexterity. 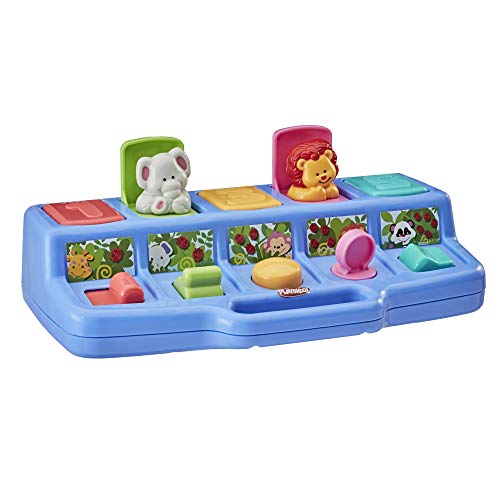 Another crowd-pleaser, this toy, for babies nine months and older, is the ultimate in pop ups.

It has a lever, beeper, key, and switches that are easy for little hands to use. Babies learn that every action has a corresponding reaction.- 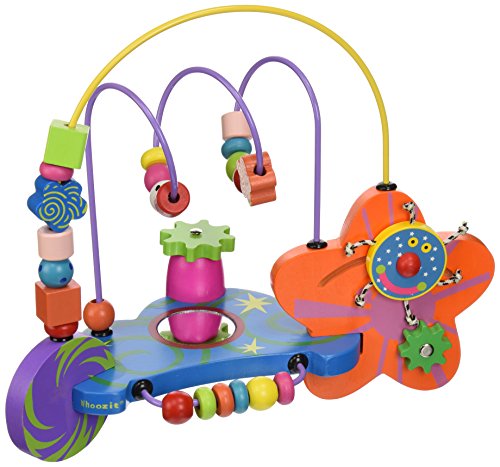 This toy builds tactile skills and helps babies learn cause and effect with its bright colors and self-discovery mirror.