You Can See The Northern Lights This Weekend in These U.S. Cities

When and where to look.

On Saturday night, people in certain cities across the U.S. may see the sky light up in shimmering shades of green, blue and pink as a solar storm pushes the aurora borealis, also known as the northern lights, south.

The National Oceanic and Atmospheric Administration (NOAA) issued a geomagnetic storm watch on March 20 after detecting a solar flare (a high-energy burst fired by a sunspot) that was followed by a coronal mass ejection (CME), which is a massive cloud of charged particles from the sun. The CME is expected to hit Earth sometime on Saturday.

When it does, the particles will collide with those of the aurora borealis, the celestial phenomenon that’s caused by electrons colliding with gases in the Earth’s atmosphere.

As a result, the northern lights, which are usually only visible in northern places like Alaska, Norway, or Iceland, will be able to be seen from lower latitudes. The NOAA predicts that areas as far south as “New York to Wisconsin to Washington state” will have a chance to watch the aurora borealis from their own backyards on Saturday. (However, the further north you are, the more vibrant the sky will be.)

To see the stunning spectacle, skies will have to be clear, so if there’s rain in the forecast in your area, you may be out of luck. Experts also recommend getting as far away from cities or urban areas as possible as pollution can hinder your view.

Scientists aren’t sure exactly what time the CME will reach Earth on Saturday. And when it does, the northern lights can be unpredictable. Charles Deehr, an aurora forecaster at the University of Alaska Fairbanks’ Geophysical Institute, told Space.com, “Active periods are typically about 30 minutes long… It’s a sporadic phenomenon, occurring randomly for short periods.”

For updates on this weekend’s northern lights or more information, click here to visit the NOAA’s Space Weather Prediction Center. 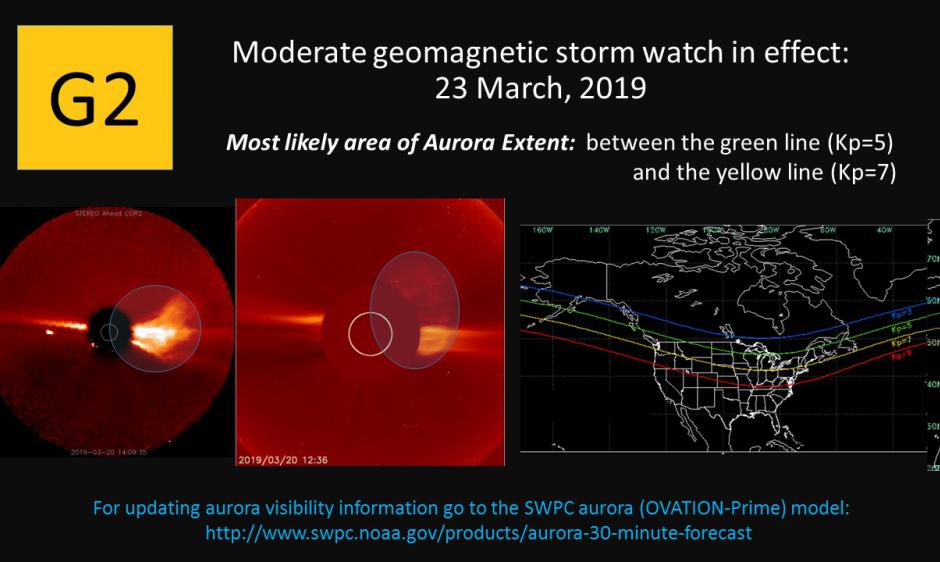