Which Batmobile is the best? Batman expert Glen Weldon talks through all of the Caped Crusader's onscreen rides.

Holy automotive super-heroics! The history of the Batmobile throughout all of the DC Batman comic books is possibly endless, but how long does it take to talk about all the Batmobiles we’ve seen onscreen either in TV shows or movies? Turns out, if you want to get hardcore, the answer to this bat-tastic riddle, is that it takes 30 minutes.  In a new video released with Wired, Batman Glen Weldon, expert and author of the book The Caped Crusade, breaks-down each and every TV and movie version of the Batmobile. And it’s freaking hilarious.

Packed with hilarious details, including the crazy-influence of the 1960’s Adam West Batmobile, Weldon leaves no Bat-tire unturned. And the best part is, he also equates each Batmobile with their respective Batman. Michael Keaton’s Batmobile is totally closed off, indicative of his Bruce Wayne. Meanwhile, George Clooney and Val Kilmer’s Batmobiles are more open, and Clooney’s even has an open cockpit!

Weldon touches on animated Batmobiles, too, and even Batmobiles that appear for like 3-seconds, like in Titans or Gotham. Turns out, not all Batmobiles are cool, even if most of them are. Best of all, Weldon also talks a little bit about Pattinson’s new Batmobile which looks like it could totally be the weirdest Batmobile of all time.

If you want more on the history of Batman, grab Weldon’s excellent book. You literally won’t regret it. Also, early father’s day present for someone? 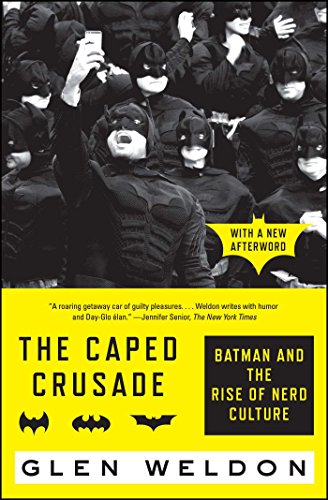 The Caped Crusade: Batman and the Rise of Nerd Culture