"It's instructing kids to kill themselves."

Kim Kardashian is begging YouTube to remove all “Momo Challenge” videos from its kids’ videos. The creepy viral challenge features a face called “Momo” who encourages children to complete dangerous tasks, including self-harm.

“Parents please be aware and very cautious of what your child watches on YouTube and KIDS YOUTUBE,” read the screenshot. “There is a thing called ‘Momo’ that’s instructing kids to kill themselves, turn on stoves while everyone is [sleeping] and even threatening to tell their parents.”

Cautioning that it’s been seen on Peppa Pig, LOL Dolls, and more, the mom went on to say, “It doesn’t come on instantly so it’s almost as if it waits for you to leave the room… There’s also videos of cartoons doing sexual things, violent things.”

Kim posted the screenshot along with a simple plea: “@youtube please help!” YouTube then responded, resharing the 39-year-old’s story and writing, “@kimkardashian thank you. We take these reports really seriously. We’re on it.”

However, despite the mom’s warning, authorities have yet to confirm that the “Momo Challenge” is actually causing kids to harm themselves or others. Many claim it’s an urban myth and more of a scaremongering tactic than a valid reason for concern.

“This is the latest ‘hot topic’ which is spreading like wildfire due to its sensationalist nature and is causing a lot of parents to be unnecessarily worried,” cyberpsychologist Dr. Dawn Branley-Bell explained to Yahoo.

YouTube also claims it hasn’t seen the viral video popping up lately. In a statement to PEOPLE on Wednesday, the social media platform said, “Contrary to press reports, we’ve not received any recent evidence of videos showing or promoting the ‘Momo Challenge’ on YouTube. Content of this kind would be in violation of our policies and removed immediately.” 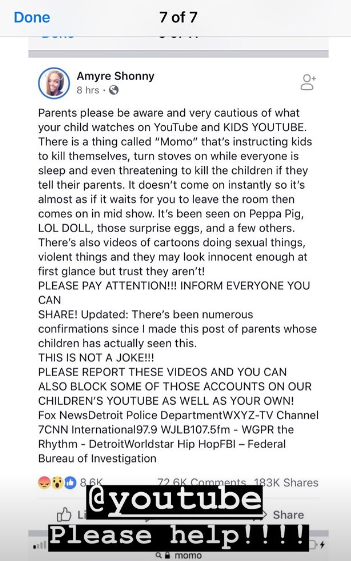 ADVERTISEMENT
ADVERTISEMENT
More From News
News Democratic Plan to Provide 8 Million Green Cards Rejected
News This Map Shows the Happiest, and Least Happy States in the US
News The FDA Only Recommended Booster Shots for A Specific Group. Why?
News The Elusive Draconid Meteor Shower is Coming — Here's How to Catch It
News Cuba to Vaccinate Toddlers Against COVID-19
News A Dad is Suing a Michigan Teacher, Staff For Giving His Daughter a Haircut