And the most expensive city for childcare is...

Over the past few years, childcare, including babysitting, has gotten increasingly more expensive. But how much does it really cost to hire a sitter for the night? About $16.75 an hour for one child and $19.26 for two in the United States, according to a recent survey that analyzed the average babysitting rates in cities across the country.

Based on data from 28,000 families, UrbanSitter’s eighth annual childcare study found that the national average for one child is up 32 cents, from $16.43 in 2018.

The 2019 survey then broke down average costs by city. Researchers discovered that the most expensive city for childcare is once again San Francisco, where parents pay about $18.75 for one child and $21.30 for two. Other cities where babysitters cost more than the national average are New York City, Seattle, and Boston.

The cheapest city featured on the map is Las Vegas, as parents in Sin City pay an average rate of just $11.63 for one kid and $14.71 for two. Dallas, Phoenix (which held the title of least expensive last year), Houston, Raleigh, and Miami all came in under $13 per hour.

Even in the cheaper locations, though, babysitting costs can add up fast when 58 percent of parents claim they hire a sitter once a month or more.

UrbanSitter also asked American parents miscellaneous questions about their childcare costs and habits. The results showed that 42 percent of parents are spending between $10,000 and $30,000 per child per year, with 59 percent planning to spend at least $1,000 of that total on summer nannies alone. 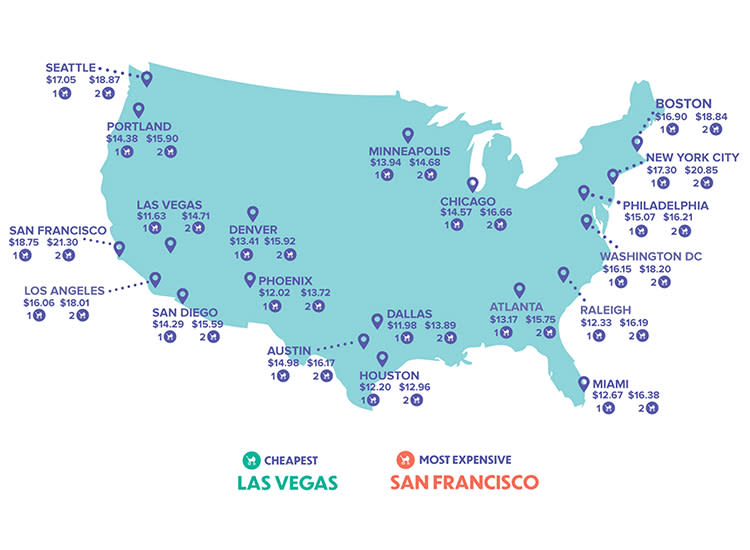 But despite the high cost, it appears that the majority of parents still feel like a night off of mommy and daddy duty is worth it. Of those surveyed, 40 percent said they most look forward to “adult time away from the kids” on date night, while another 40 percent said they’re most excited for “reconnecting with my partner.”