The Lessons In Mister Rogers’ Sweater, Sneakers, and Signature Style

The man had a uniform that worked for him. And that was by no means an accident.

Mister Rogers had style. Close your eyes and picture him. The first things to come to mind are likely his smile, that perfectly combed hair, and, of course, his brightly colored zip-up cardigan. Rogers without his sweater is like Obi Wan without his robes: Unimaginable. Those zip-up cardigans, as well as his pressed khakis, canvas sneakers, and tab-collared shirt and tie, played a starring role on Mister Rogers’ Neighborhood. The man had a uniform that worked for him. And that was by no means an accident.

Everything about Mister Rogers was purposeful, intended to make children feel safe and comfortable. He was a gentle parental figure and his outfit reflected that. Just consider the iconic sequence that kicked off all 895 episodes of the show, where Rogers hung up his suit jacket, zipped up his cardigan, and sat on the bench to swap his loafers for sneakers as though he was a parent returning home after a day of work. The sequence was familiar and formal, a routine that calmed viewers and officially welcomed them to the neighborhood, sure, but also reminded a good deal of their own parents changing clothes after a hard day at the office.

Like any good outfit, it also served a purpose. Consider his shoes: The classic navy Sperry sneakers he wore — lived in, but never worn through — were comfortable, sure. But they also helped him sneak quietly backstage to control Daniel Striped Tiger, King Friday XIII, and all the other characters in the Neighborhood of Make believe without kids noticing his footsteps. And then there’s the classic zip-up cardigan. Each sweater he wore was a tribute to his mom. She knit them herself and gifted them to him each Christmas.

Rogers was intentional about his outfit and it helped define him. Manners maketh the man, sure, but clothes help. And his sartorial choices remain relevant today. In fact, his red cardigan sits on display at the National Museum of American History. Those classic Sperry sneakers? They’re still available to purchase.

There’s something about finding a uniform, a stylistic consistency that helps define who you are to those in your life. It makes you familiar to your friends and family. It also gives you one less thing to worry about. Consider Steve Jobs and his iconic black turtleneck, a stylistic choice he used to define his personal brand but also one that provided him with one less decision to make every morning.

“It’s not about what’s trendy or cool. It’s what makes you feel most comfortable so you can get on with your day,” says Jeanne Yang, one of Hollywood’s top men’s stylists who has helped Robert Downey, Jr., Jason Momoa, and Jamie Dornan establish their looks. “It’s nice to create a look so you can get to the work at hand. You don’t have to think and you can focus.”

For her part, Yang fully embraces the concept of total continuity in fashion. Equally important, she says, is the statement an outfit makes in establishing an identity.

“It’s a really important part of branding yourself. Or becoming recognized for that,” she says. “Think of Pharrell and his short suits. When you create a signature look, it makes you that much more recognizable.”

There’s also the element of comfort to a good uniform. When creating a signature look, you want to select what makes you feel good, and stick to it.

“You find a look that’s comfortable for you. You find silhouettes that are flattering. You hone it.” she says. “It instills some of your personality in it.”

Fred Rogers’ uniform is as much a part of his legacy as his call for kindness and empathy. That was purposeful. Worn well, it still remains the symbol of a calm, nurturing soul. Much like his lessons, Rogers’ clothes remain timeless.

How to Find a Modern Mister Rogers Sweater

If you’re looking to don a zip-up cardigan like Rogers, Yang says the fit is the most important aspect. You want a sweater that’s not too loose and not too tight. A neutral color helps, too, as it can be worn with a variety of outfits.

If you’re not so lucky to have a mom who knits the sweater to your exact shape, consider tailoring your sweater. Start with the sleeves and always go a size smaller with them. “They end up looking too big,” she says. “You look like a hunchback.” 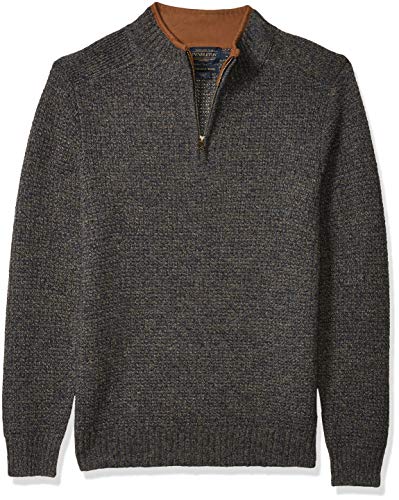 This half-zip cardigan has a thicker ribbed stitch for added dimension, which lets it do double duty as a jacket.

While Rogers’ sweaters were hand-made, and usually rather loud and vivid in color, this understated, perfectly weighted sweater is a go-to in winter and beyond. It’s machine washable, too, and made to last for years. It’s a modern classic.

Admire Fred Rogers? We do too. That’s why Fatherly has released Finding Fred, a narrative podcast about the ideas that animated Mister Rogers’ Neighborhood and what they mean in 2019. Listen to the show on iTunes or online to hear journalist Carvell Wallace grapple with the legacy of a kind, but complicated man.
Oops! Please try again.
Thanks for subscribing!