You Might Be Considering One, But Are Baby Walkers Safe?

In the race to go from watching them crawl headlong into the coffee table to taking your kid hiking, the baby walker beckons with its promise of easy steps, but a question looms: Are baby walkers safe?

There was a time when baby walkers – seats suspended in frames that allow your pre-ambulatory pooper to scoot around the house – were thought to promote walking skills. There was also a time when letting the kids roll around in the back seat while driving around with a Pall Mall in one hand and a beer in the other was thought to be safe family transportation.

While the latter is roundly rejected by, well, everyone, the former has been singled out by The American Academy Of Pediatrics (AAP) as delaying motor and mental development. More than that, they say baby walkers are downright dangerous. Even with Big Safety turning their noses up at baby-walkers, a quick scan of a prominent big box baby retailer’s website reveals no less than three pages of baby walkers in varying shapes, complexities, and prices. Obviously the message has not been received. 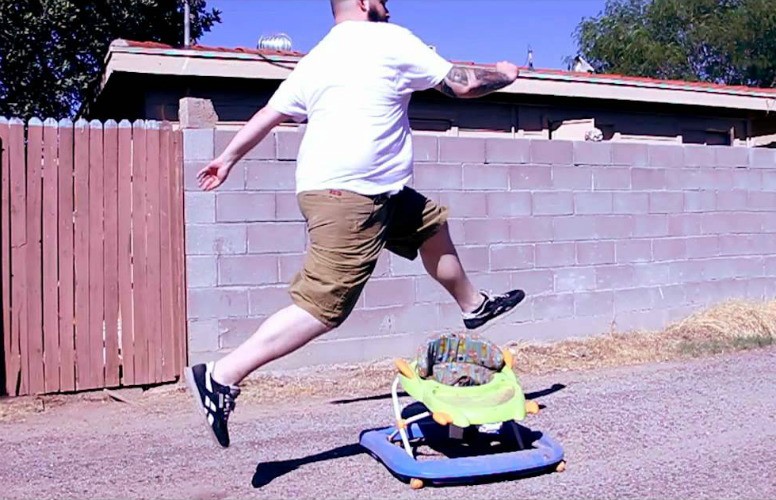 That’s all the more remarkable when you consider that the AAP’s most recent baby walker study noted that even with interventions like baby gates and supervision, the devices still led to injuries. The worst occurred when walker-bound kids inadvertently plunged down stairs, many times while under the supervision of both parents. How does that happen? A baby in one of these wheeled devices can reach speeds of three feet per second, which is fast enough to get from safety to, “Oh shit!” before you can do much about it.

Consumer Reports has seen the AAP’s safety concerns and raised them by unequivocally denouncing all baby walkers unsafe. Full stop. Yes, even you, walker with supposed safety features like friction strips that all too easily wear out and fail. They recommend instead that parents consider an immobile, circular swivel activity center.

If, after all of this, you still insist on getting a baby walker, Consumer Reports does have a list of safety features that the walker should have. They’d really, really rather you didn’t, though. Junior will thank you, and so will your toes.

ADVERTISEMENT
ADVERTISEMENT
More From Health & Science
Pregnancy The Science Behind Common Abortion Techniques
Nutrition Study: Intermittent Fasting Is Not All That Effective for Weight Loss
Health & Science Is Skipping Breakfast Bad? A New Study Makes the Case for Rising and Dining
Sickness & Allergies Yes, You Should Get a COVID Vaccine If You’re Pregnant
Health The Truth About Legalized Marijuana's Impact on Teens and Kids
Nutrition Salt, Sugar, and Fat Are the Biggest Health Threat to Kids. Anyone Listening?