Kids Are Bad at Brushing Their Teeth. This Philips Sonic Toothbrush Helps.

Have you ever gone to the pediatric dentist for seven Saturdays in a row with your son? I have.

Three years ago, my son slouched in a dental chair and watched cartoons on the overhead screen, oblivious to what his pediatric dentist was about to say. “He has seven cavities, Mom,” Dr. Wendy pronounced. “Seven. He has to come back seven Saturdays in a row to get them filled.” It was one of the low points of my parenthood journey. He didn’t just have cavities — he had seven of them. He had more cavities in his mouth than years spent on this earth.

We had to make a change, and right away. Dr. Wendy recommended switching to an electric brush for a more thorough cleaning, so, after researching the options, I went with the Philips Sonicare for Kids for several reasons: It’s affordable. It’s easy to use. And it looks cute, which makes it less intimidating to my kid, who became dental hygiene-phobic after that visit. It also has a timer to help kids clean their teeth for the recommended two minutes, as well as, amazingly, alerts to ensure that kids brush teeth in every section of their mouth. 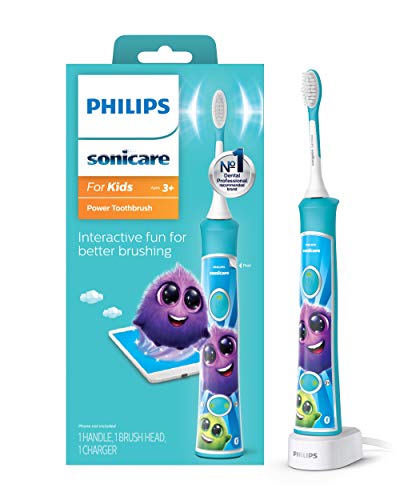 This sonic toothbrush gets kids' teeth clean, even when they refuse parents' help.

The thing is, I had always been vigilant about oral hygiene, making sure my son brushed for two minutes morning and night. He only drank water before bed. We even flossed. But it turns out that kids, especially little ones, aren’t particularly skilled at getting all those back teeth clean. And haplessly rubbing a toothbrush against the teeth isn’t quite the same as focused, energetic, concerted brushing. I tried to do the brushing for my son or at least supervise it (which experts say parents should do until the age of 6), but he rebelled, twisting and squirming and yelling that he wanted to do it himself. I chose my battles. The Philips Sonicare makes it so that, even if I’m not allowed to be involved, my son’s teeth will get clean.

An electric toothbrush isn’t Harry Potter’s magic wand for teeth — it’s actually much simpler than that. According to the American Dental Association, kids, because they’re not as dextrous as adults, may benefit from an electric toothbrush simply because it gets a larger area clean in a shorter amount of time. There’s less room for error. It’s even better if the toothbrush has a timer, so kids can’t just stop brushing when they lose interest.

The American Pediatric Association concurs, stating that electric toothbrushes are “especially useful in situations of limited movement. They do the work for you, they position well, and the small head can help limit the amount of toothpaste to what is appropriate for children.”

But the brush also does a good job of catering to kids’ preferences along with those of the experts: it comes with stickers for them to customize the brush, plus a bunch of extras just because… stickers. Replacement brushes come in several sizes for different ages. And the built-in timer is a compassionate timer: it can be set to gradually build up to two minutes, for kids who aren’t used to brushing for that long.

But ultimately, I didn’t care about the bells and whistles and stickers: I wanted this thing to work. Since he began using the brush three years ago, my child has been 100 percent cavity-free. His diet remains as Goldfish-laden as ever. He’s actually started sneaking soda. But the two minutes of brushing morning and night remain non-negotiable.