Who needs a state-of-the-art jug that can hold five gallons of water and filter it in an emergency? The better question is, who doesn't?

In addition to a very fun-to-say word, a jerrycan is a boxy container for liquids invented by Jerries, a slang term for Germans, in the 1930s. Lifesaver took this proven design and added a state-of-the-art water filter that can turn contaminated water into drinking water. The Lifesaver Jerrycan is perfect for lovers of the outdoors and survivalists — or anyone who is concerned about storms or industrial accidents tainting their water at some point. That is to say, the Jerrycan is an emergency must — something that should be in everyone’s basement.

The Lifesaver Jerrycan holds just short of five gallons of water. It weighs a little over eight-and-a-half pounds when empty, and measures about 14 by 7 by 21 inches. It’s portable enough to bring on your next car camping trip, eliminating the need to weigh yourself down with heavy water bottles, but it also works well as a backup water supply. Leave a jerrycan full of water in the basement and you can filter it if and when you don’t have access to clean drinking water. All you do it turn it on its side and let gravity do its work as it runs the water through a state-of-the-art filter.

Its ultrafiltration filter medium is certified to remove over 99.99 percent of viruses, over 99.9999 percent of bacteria, and over 99.9 percent of cysts. That’s enough to exceed compliance standards used by the US Army Public Health Center, which sounds pretty good to us. 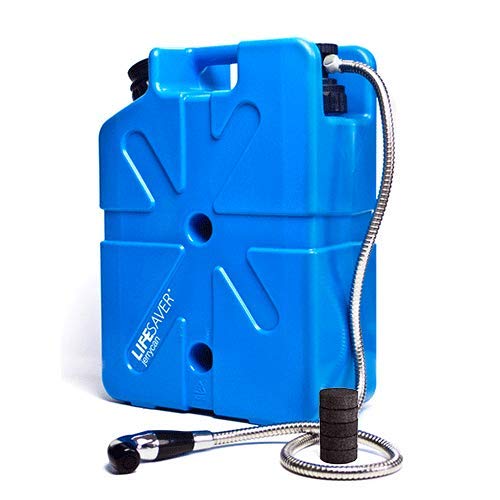 A water container that looks simple but contains an easy-to-use and extremely effective filter.

The cartridge itself is a real workhouse, an activated carbon disk that can filter up to 10,000 liters (2,641 gallons) of water. But don’t worry, you don’t have to keep track of how much you’ve used yours; there’s an automatic indicator that lets you know when it needs to be replaced.

Take note that it’s not a desalinator, so while it can turn dirty water clean — suitable for drinking, cooking, and even showering with an available attachment — it can’t turn salt water into fresh. So while it won’t do you much good at the beach, it’s a great addition to your camping gear and/or survival kit.