We pity the thieves trying to steal your wheels.

It only takes a thief a few minutes to make off with the bicycle you thought was securely locked up. The reality is that bike bandits can cut through cables and traditional bike locks with such speed and ease that it’s hardly worth it to buy one. Instead, it’s time to bring your velocipede security into the next century. It’s time for the Bisecu smart bike lock, which not only secures your bike but also lets you do bike sharing and know how many calories you burned while biking. 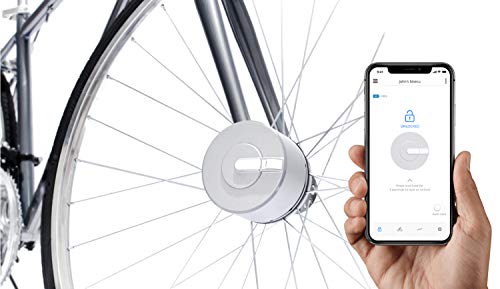 This smart bike lock lets off a piercing alarm if someone tries to swipe your wheels.

This bike lock, like other smart devices, works through its own proprietary app. Install the hardware over your bike’s front wheel hub, and when you walk away, either lock it through the app or set it to automatically lock when you’re out of range. The hub is now frozen in place, preventing thieves from pedaling it an inch. Upon your return, unlock it or set it to auto-unlock and you’re on your way.

Should someone try to pick the whole bike up (a not-so-subtle sight, but still a possibility), the Bisecu smart lock senses movement and emits an ear-piercing, 100-decibel alarm, which will not only give would-be thieves a start but alert you. Just for comparison’s sake, that’s about as loud as a jackhammer, or a power lawn mower.

You’ll also receive a push notification on your phone, provided you’re within its 100-foot Bluetooth range.

Finally, it’s not just about security with this device. Through its smart sensor, the hardware acts as a bike computer, recording and transmitting data like mileage, speed, calories burned, and time directly to the app. This can then be shared and/or bragged about.

All these features come packed into an aluminum alloy body, which is weather- and vibration-proof and quickly recharged via USB. You’ll hardly notice it, as it’s the lightest smart bike lock on the market, weighing as much as a can of soup.

Bike robbers are always innovating ways to rip off your trusty two-wheeled steed, but unless they pick up coding, your bike has never been more secure. The Bisecu smart bike lock is modern protection for an age-old problem.

Bike bike lock Want
ADVERTISEMENT
ADVERTISEMENT
More From Gear
Gear This Stunning Superhero Cape Turns Any Kid Into an Avenger
Gear The Best Hazy IPAs to Add to Your Cooler This Summer
Gear The Beloved, Notorious Montessori Bed: What Parents Should Know
Gear This Felt Building Kit Is One Truly Sensational STEM Toy
Home How to Unclog Any Drain, From the Kitchen Sink to the John
Gear Skin Care for Men: The Best Subscriptions for Everyone From Rookies to Aficionados