Make Room In Your Backyard for This Geodesic Dome From Amazon

There's so much you can do with this thing.

Amazon has transformed the economy, and the e-commerce giant is trying to do the same to your backyard. You can build an entire village back there, complete with tiny house, sauna, and log cabin, but no backyard Amazon colony is complete without this geodesic dome.

The Garden Dome Igloo is a 107-square-foot structure with a circular footprint that has an 11 foot, nine-inch diameter. Its supports are made of two different synthetic polymers, PVC and Nylon 6, that are both strong and relatively light. A transparent soft PVC cover encloses the structure.

Weight bags for soft ground (think sand or grass) and clamps and screws for hard ground (concrete or wood) are also included. You’ll definitely want to use them, as the combined shipping weight of the whole thing is just 57 pounds, so it’s liable to slide around (or worse) if unsecured.

Building the dome is basically like constructing a giant K’Nex model. You start with the bottom, connecting the struts together with joint pieces before pulling them together in a circle that lays flat on the ground. You do the same thing as you build up the walls, slotting struts into the holes in the joints on the ground and connecting the tops to each other, gradually curving the structure up to its apex. 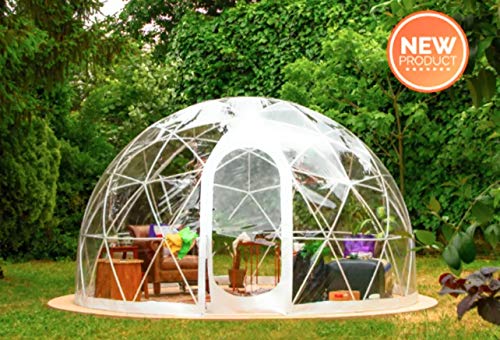 A build-it-yourself dome with a bunch of possible uses.

Once the frame is up, simply drape the cover over it, aligning the opening flap in the cover with the opening in the frame. Go inside, tighten the flap to seal the cover and tie the bottom to the base of the dome with the included Velcro straps.

And that’s it. The manufacturer says that the wrinkles in the cover will dissipate after being unfolded for three weeks. It can sustain winds of up to 31 miles per hour and 90 pounds of snow.

It would be great for that low-budget, fan-made sequel to Bio-Dome you’ve been working on in your spare time, but even people who don’t appreciate Pauly Shore’s comedic genius can use this dome as a greenhouse and gazebo. We also think they’d come in handy for backyard camping and stargazing with the kids even when the temperature takes a dip.

One of these domes will run you $1,199. That’s a significant chunk of change, but the ease of delivery, fairly simple setup process, versatility, and, let’s face it, the fact that it looks awesome make the Garden Dome Igloo worth considering if you have the space and the cash.

Amazon Backyard Commerce
ADVERTISEMENT
ADVERTISEMENT
More From Gear
Gear This Stunning Superhero Cape Turns Any Kid Into an Avenger
Gear The Best Hazy IPAs to Add to Your Cooler This Summer
Gear The Beloved, Notorious Montessori Bed: What Parents Should Know
Gear This Felt Building Kit Is One Truly Sensational STEM Toy
Home How to Unclog Any Drain, From the Kitchen Sink to the John
Gear Skin Care for Men: The Best Subscriptions for Everyone From Rookies to Aficionados